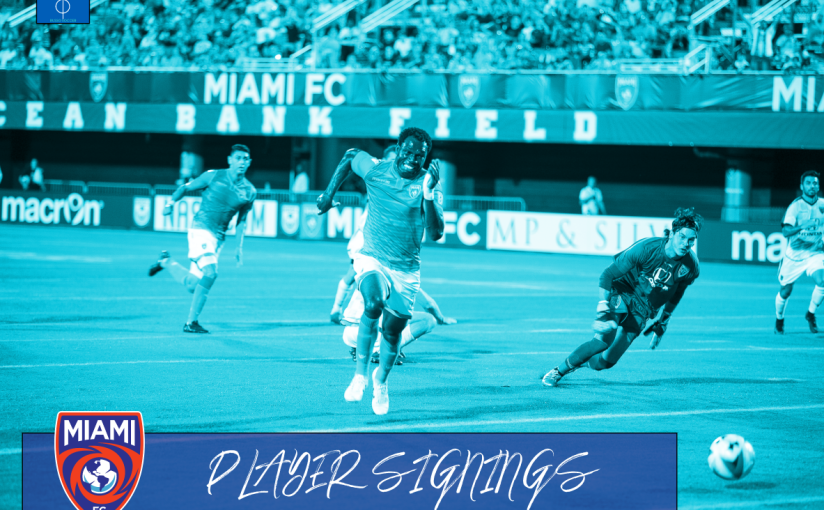 As the Miami FC begin preparations for the 2020 USL Championship, over the past several days thirteen additional players have confirmed their return to the club for the upcoming campaign.

Ahead of the return to preseason next week, Head Coach Nelson Vargas said: “I’m ecstatic that we have been able to maintain the core of the team. The value of having players who have worn the crest and who embody The Miami FC DNA help with our transition to a new league.”

On January 10, the club announced that winger Prince Saydee has signed with The Miami FC (subject to USL and Concacaf approval) for the upcoming USL Championship season. Saydee is a Liberian international who joins from Atlanta SC where he put in a man-of-the-match performance against The Miami FC in a 2-2 tie in October 2019. Prior to that, Saydee played in Liberia and trialled with Slovakian side Slovan Bratislava in 2016. He has blistering pace and can play on either the left or right wing. His success playing against Miami led to his being recruited by the club.

Head Coach Nelson Vargas said: “Prince was on our radar when we first scouted Atlanta SC as opponents. He was a real handful in both games we played against them and several of our players said that he had something a bit different … He will bring the ability to break lines and drop deep when necessary, but it’s his acceleration and change of speed with the ball that is his main asset. He has great will and desire, whilst remaining extremely humble and these are characteristics befitting of a Miami FC player … I’m very happy to have him in the squad and believe he will bring excitement to the team.”

Prince becomes The Miami FC’s second new signing for 2020, having previously announced that forward Romario Williams will join up with the squad for preseason.

On January 9, the club revealed that Defenders Marco Franco and Brenton Griffiths, midfielders Brian James and Tomas Granitto and forward Miguel González all are returning to the club ahead of preseason.

Marco Franco, 28, was signed by The Miami FC in January 2019. He was a first-round pick in the MLS SuperDraft, having been selected by Chicago Fire in 2014. He spent one season with Chicago before becoming a regular starter on Indy Eleven’s back line from 2015 to 2017. The defender made 13 appearances for The Miami FC in 2019.

In 2019, Jamaican U-20 international Brenton Griffiths was a regular fixture in The Miami FC back line, making 13 appearances and registering 3 goals. Griffiths, 28, signed for The Miami FC in January 2019 after completing two successful seasons with Reno 1868, having helped the Nevada side reach the USL Championship’s Western Conference Semifinals in 2018.

Brian James will return for a third season. Originally from Boca Raton, the 26-year-old midfielder was drafted out of college by Toronto FC in the 2016 MLS SuperDraft. James’ father, Alvin, played professional soccer for Fort Lauderdale Strikers. 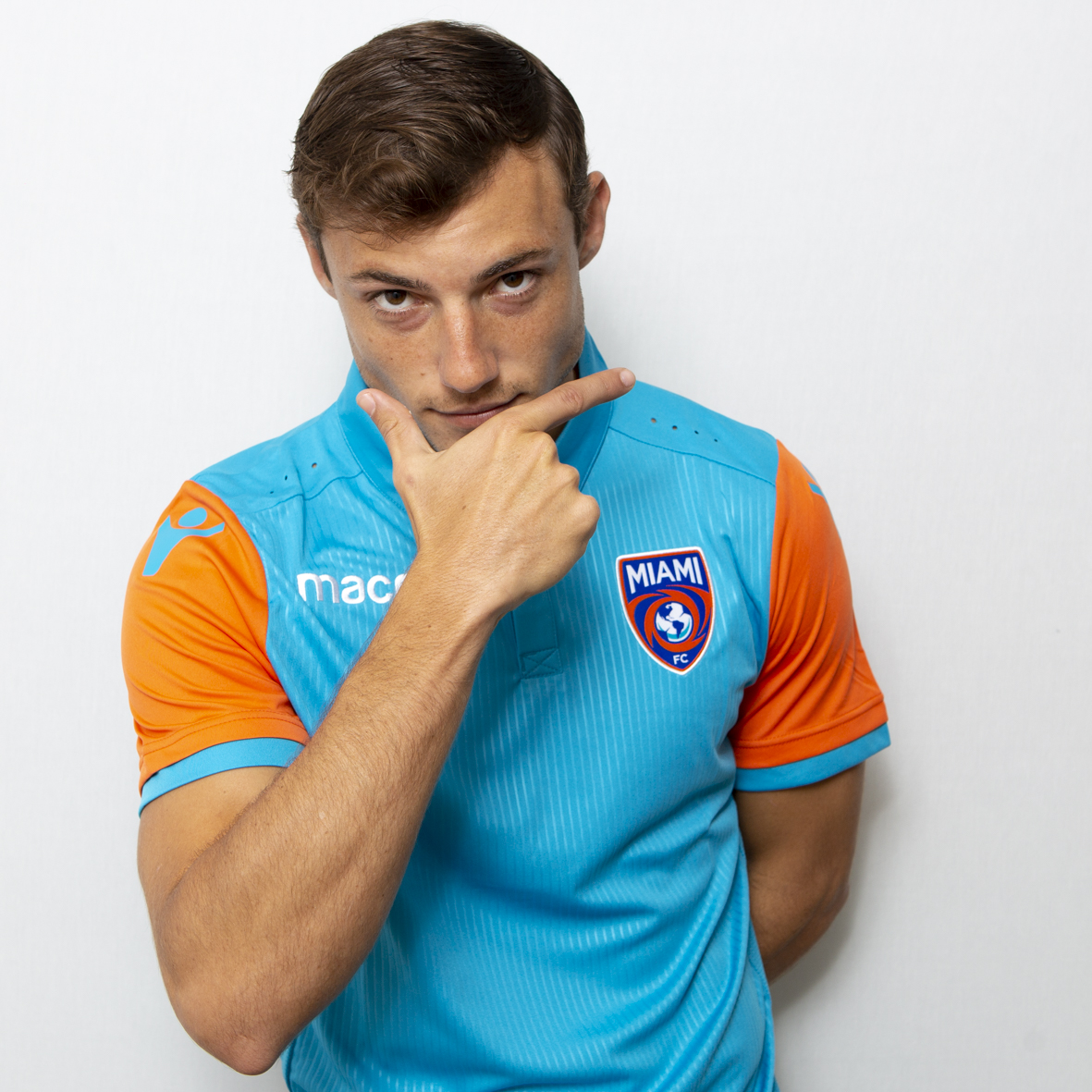 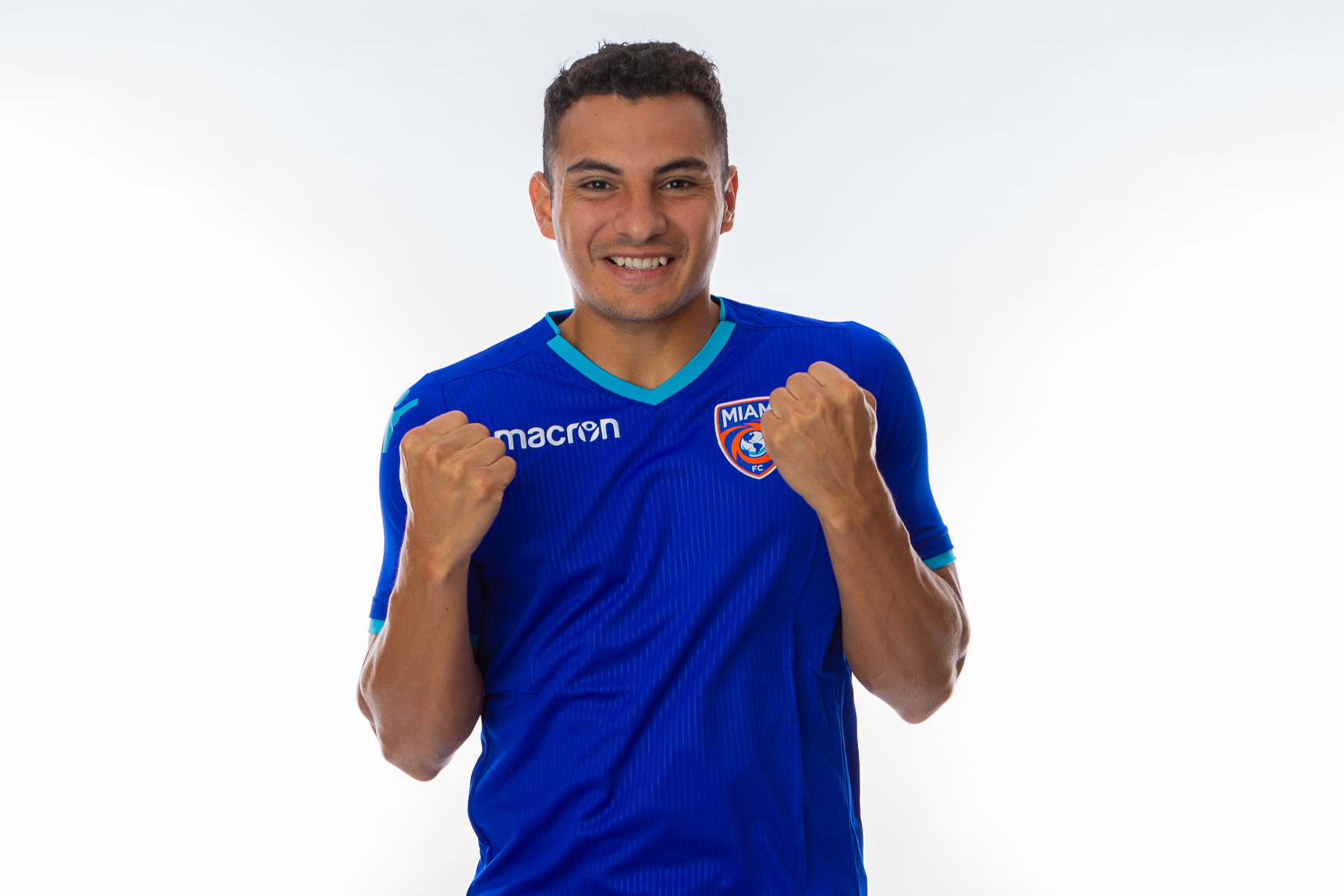 A native of Mexico, Miguel González, 29, brings USL Championship experience in addition to being a returning member of the Miami FC squad, where, in 2019 González racked up 22 goals, setting a new single calendar year record for goals scored by a Miami FC player. He spent the first two years of his professional career in the PDL (now called USL League Two) with Seattle Sounders II and the Kitsap Pumas. He then moved to the USL Championship with the Colorado Springs Switchbacks before joining the Oklahoma City Energy FC in 2017, where he spent two seasons and made 46 appearances.

On January 8, the club announced that Goalkeeper Bryant Gammiero, midfielder Hector Morales and forwards Mo Thiaw and Othello Bah all inked new contracts with the club.

Bryant was signed in September 2019 from local side the Florida Soccer Soldiers. He’s 26, is equipped with quick reflexes and is known as an shot-stopper. Previously, Gammiero represented Miami United and featured in the first ever “Miami Clásico” meeting between Miami United FC and The Miami FC in 2018.

Hector Morales, a 26-year-old Cuban national joined The Miami FC following a successful Open Tryout in February 2019. An attacking midfielder, Morales enjoyed a spell at FC Ciudad de La Habana in the Cuban top division. He has represented Cuba at the U-17, U-20 and U-23 levels. 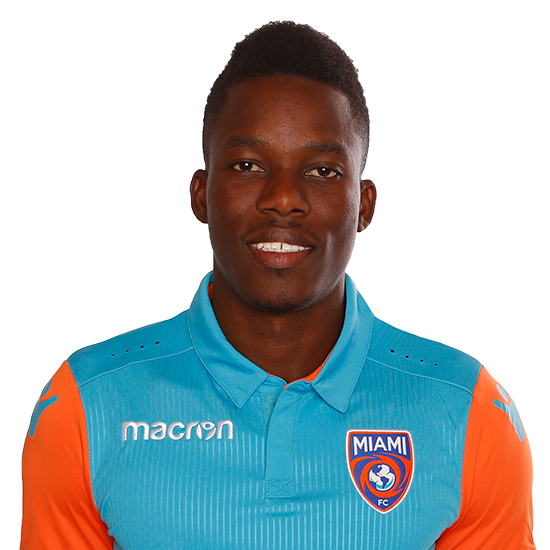 A native of Virginia, Liberia, Othello Bah, 24, joined The Miami FC in January 2019 and opened his goal scoring account in the NISA Showcase opener against Philadelphia Fury. Bah previously played for Chattanooga FC.

Born in Dakar, Senegal, Mo Thiaw was selected by the San Jose Earthquakes during the 2018 MLS SuperDraft. However, he spent the season on loan at Reno 1868, scoring three goals and providing two assists over 24 appearances. He signed with Miami in January 2019. The powerful forward scored an impressive 14 goals in 15 appearances for Miami FC in 2019. A 6-2 forward with technical ability, Thiaw can play all along the attacking line.

Recently, the Miami FC announced the return of three other players for the 2020 campaign: Mark Pais, Jalen Markey, Harrison Heath and Lloyd Sam. 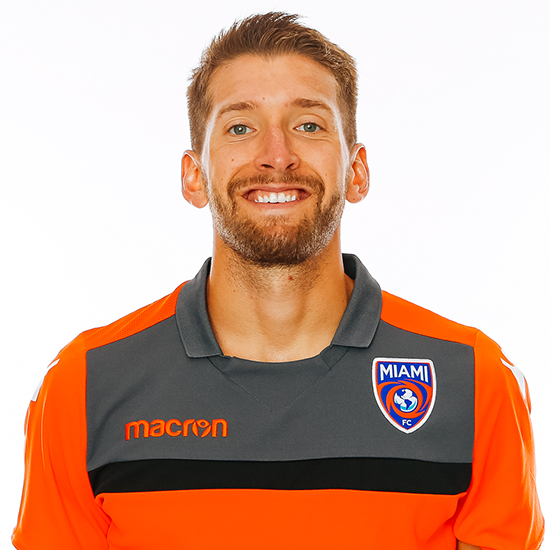 Pais was signed in January 2019 and with outstanding performances became the starting goalkeeper for Miami FC during triumphant seasons in the NPSL and NISA Showcase. Having spent time at Fresno FC and Toronto FC’s development team, TFC II, the shot stopper will relish our season opener at another of his former teams, Saint Louis FC, on March 7.

Centre back Markey, also signed in January 2019, joined Miami FC from Seattle Sounders II and the 6’ 2” Washington native who played university soccer at Oregon State added some defensive steel to the back line. 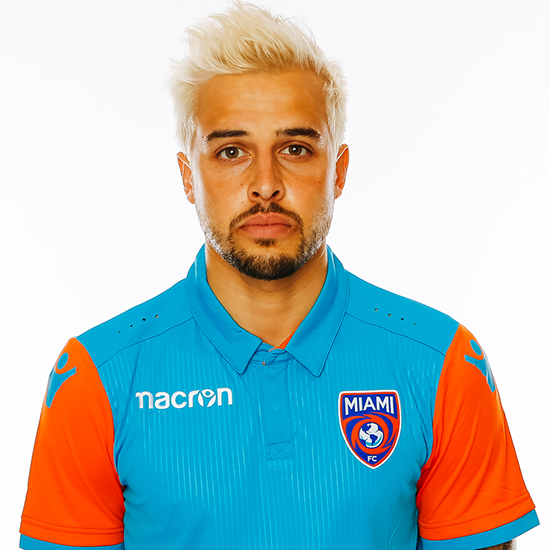 A native of England, midfielder Heath played on Norwich City’s U18 squad, before continuing his career on this side of the pond with time at Minnesota United, Atlanta United and Orlando City. Signed by Miami FC in February 2019 he became a familiar fixture in the Miami FC midfield in the 2019 season. 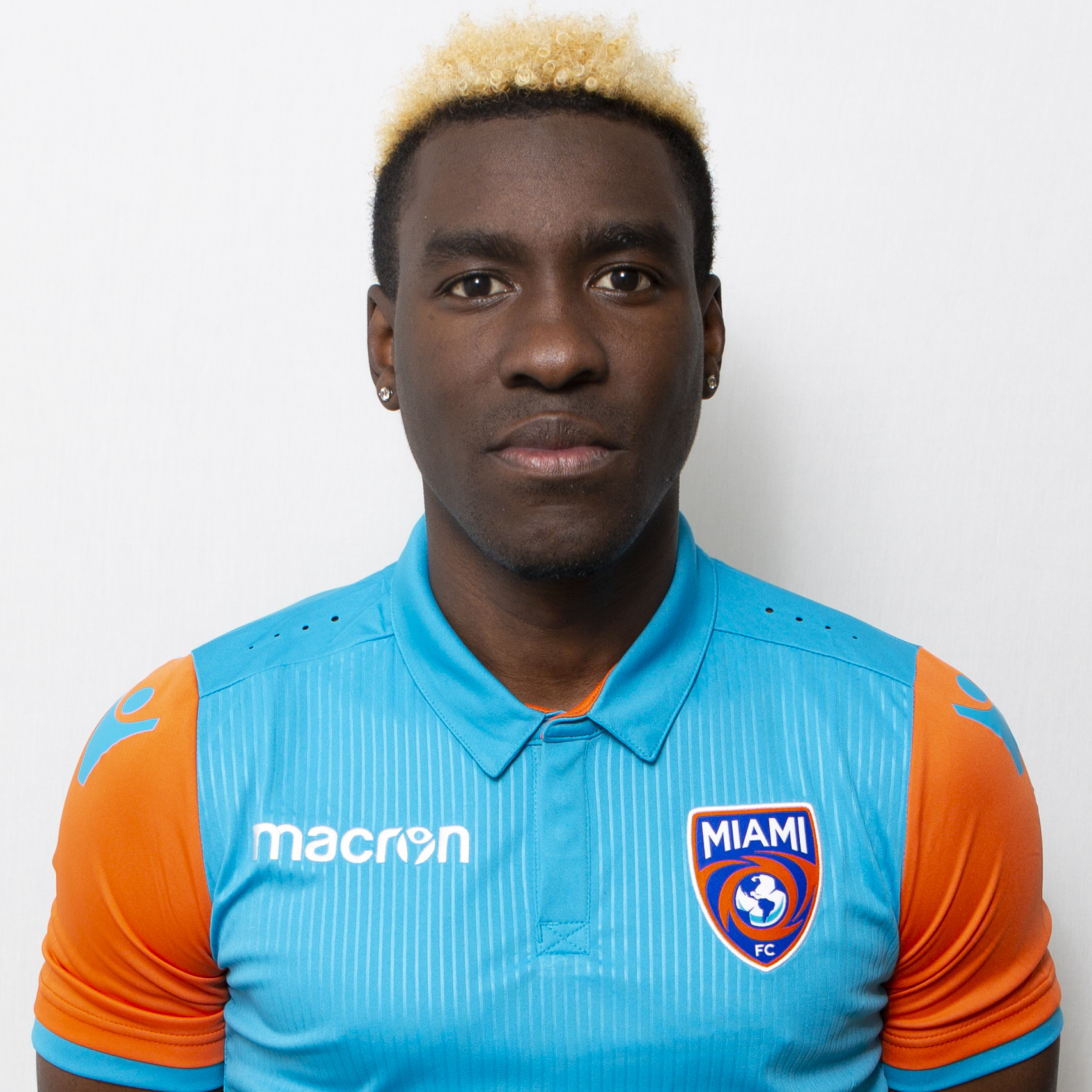 Lloyd Sam is a veteran forward who adds much experience to the Miami FC attack. Sam began his career with Charlton Athletic, making 119 appearances between the Premier League and Championship for the club before spending three years with Leeds United. He then moved to MLS, where he made 106 appearances and scored 20 goals with the New York Red Bulls before being traded to D.C. United, where he spent two successful seasons. He signed for Miami FC in January 2019. Sam, 35, was on the scoresheet in the NISA Showcase East Coast Championship as Miami FC ran out 3-0 winners over Stumptown Athletic to win its 9th trophy in 4 years.

“One of the first things Paul Dalglish and I discussed was the importance of maintaining a core of players who understand the club’s ethos. Being able to bring these players back also helps the process for new players to settle in and allows us to continue to play the Miami FC way,” head coach Nelson Vargas said.

Coach Vargas also added: “Retaining a consistent core of our squad was one of the most important decisions we made when building our roster. We have a clear methodology, playing style and demands that require a certain player profile. I’m grateful to the players, Paul Dalglish and the whole Miami FC organisation for all the hard work in getting a lot of our guys back.”

Here is a list of the thirteen players who have signed contracts for the 2020 season:

Miami FC’s first game as a member of the USL Championship kicks off on Saturday March 7, 2019 when Miami plays away against Saint Louis FC. The first home game for Miami in the USL Championship will take place on Friday, March 13, 2019, at Riccardo Silva Stadium, against the Tampa Bay Rowdies. This year’s crop of talent coming through once again has a good number of talented players, a few of whom could thrive and prosper in MLS given the right opportunity.

First round coverage of the draft will be streamed live at 12:30 pm ET on the ESPN app, as well as through ESPN social media accounts on Twitter, Facebook and YouTube.

For more information and a look at who the top players are, click on the below:

A look at this year’s mls superdraft

The details for the 2020 MLS SuperDraft presented by adidas were released today. The draft will take place on Thursday, Jan. 9 at 12 p.m. ET.

Some changes were also announced by the league. The draft is evolving in 2020 to streamline the draft process and provide fans with an innovative experience in collaboration with media partners ESPN and Twitter.

The 2020 SuperDraft presented by adidas will be conducted during a jointly produced MLS and ESPN show. The show will stream live on Twitter, with a Twitter Event Card that includes the live stream and real-time highlights from the event all in one comprehensive experience. The live stream will feature cameras embedded with players and club decision-makers for real-time draftee reactions, live look-ins on club draft rooms, and instant engagement from fans on Twitter during the first round. Additional content and analysis will be provided across MLS league and club digital and social channels. The 2020 SuperDraft presented by adidas will also stream live on the ESPN App, YouTube and Facebook.

The 2020 MLS expansion clubs will have the top selections in the draft, with Inter Miami CF owning two of the top three picks, the first and third picks overall, and Nashville SC selecting second overall.

“The new format will enhance the experience for players and fans, while maintaining the traditional competitive aspects of the SuperDraft.”

The SuperDraft will be conducted in four rounds with 26 players selected in each round. To streamline the process, clubs now will be permitted three minutes, instead of four in previous years, to make their player selections, and there will be no intermission between rounds.

The eligible player list for the 2020 MLS SuperDraft presented by adidas will be announced on Monday, Dec. 30, following the 2019 adidas MLS College Showcase.

The 2019 adidas MLS College Showcase is a three-day event in Raleigh, N.C., where technical staffs from every MLS club will have an opportunity to scout the top collegiate prospects in the nation, including players with remaining NCAA eligibility. The event will feature approximately 40 top college players, ranging from freshmen to seniors, participating in a series of training sessions, testing, interviews, and match play. This event will allow MLS technical staffs to interact with potential SuperDraft selections earlier in their collegiate careers without jeopardizing players’ collegiate eligibility.

The 2019 adidas MLS College Showcase occurs in conjunction with the 2019 Men’s College Cup and is a closed-door scouting event officially sanctioned by the NCAA.