The details for the 2020 MLS SuperDraft presented by adidas were released today. The draft will take place on Thursday, Jan. 9 at 12 p.m. ET.

Some changes were also announced by the league. The draft is evolving in 2020 to streamline the draft process and provide fans with an innovative experience in collaboration with media partners ESPN and Twitter.

The 2020 SuperDraft presented by adidas will be conducted during a jointly produced MLS and ESPN show. The show will stream live on Twitter, with a Twitter Event Card that includes the live stream and real-time highlights from the event all in one comprehensive experience. The live stream will feature cameras embedded with players and club decision-makers for real-time draftee reactions, live look-ins on club draft rooms, and instant engagement from fans on Twitter during the first round. Additional content and analysis will be provided across MLS league and club digital and social channels. The 2020 SuperDraft presented by adidas will also stream live on the ESPN App, YouTube and Facebook.

The 2020 MLS expansion clubs will have the top selections in the draft, with Inter Miami CF owning two of the top three picks, the first and third picks overall, and Nashville SC selecting second overall.

“The new format will enhance the experience for players and fans, while maintaining the traditional competitive aspects of the SuperDraft.”

The SuperDraft will be conducted in four rounds with 26 players selected in each round. To streamline the process, clubs now will be permitted three minutes, instead of four in previous years, to make their player selections, and there will be no intermission between rounds.

The eligible player list for the 2020 MLS SuperDraft presented by adidas will be announced on Monday, Dec. 30, following the 2019 adidas MLS College Showcase.

The 2019 adidas MLS College Showcase is a three-day event in Raleigh, N.C., where technical staffs from every MLS club will have an opportunity to scout the top collegiate prospects in the nation, including players with remaining NCAA eligibility. The event will feature approximately 40 top college players, ranging from freshmen to seniors, participating in a series of training sessions, testing, interviews, and match play. This event will allow MLS technical staffs to interact with potential SuperDraft selections earlier in their collegiate careers without jeopardizing players’ collegiate eligibility.

The 2019 adidas MLS College Showcase occurs in conjunction with the 2019 Men’s College Cup and is a closed-door scouting event officially sanctioned by the NCAA. 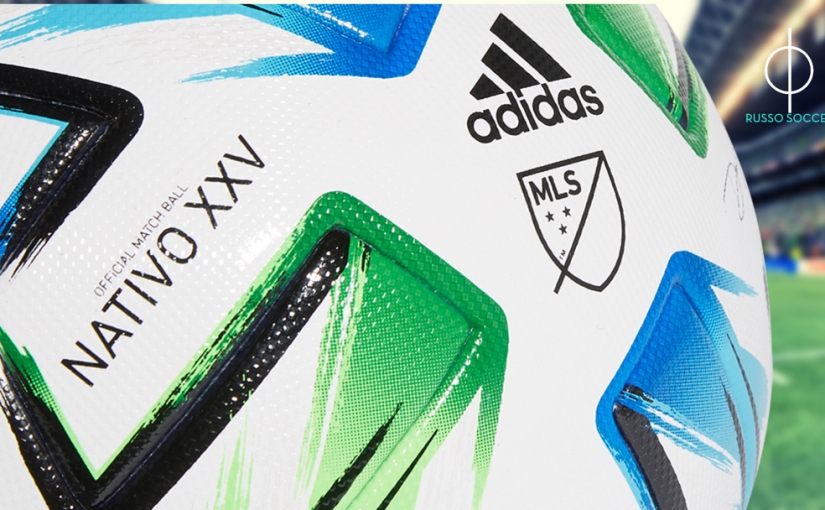 Next season is still almost four months away, but we now know what next year’s official Major League Soccer game ball will look like.

The 2020 MLS NATIVO XXV ball celebrates the league’s 25th season. By incorporating blue and green accents, it pulls inspiration from MLS’ original logo and its first-ever match ball in 1996.

The ball, which will go on sale online and in stores on January 2, 2020, is the first of “a series of initiatives” planned to celebrate MLS’ 25th anniversary, according to the league office.

Adidas says the ball has its most sustainable design to date. It is made of 100% water-based materials and print colours.

In addition, the “Hi-White” material used is supposed to allow players to see the ball better on the pitch. The ball is constructed of the same high-performance structure and panels as recent World Cup models.

The new MLS NATIVO XXV is one of the many ways MLS’ will celebrate its milestone year. In the coming months, MLS will unveil a series of initiatives to celebrate 25 years and to kick off a new decade of soccer in North America.

It is also expected that next year’s kits for the clubs will also pay tribute the the 25th-year anniversary of the league’s founding. Now if only MLS would bring back 3rd and alternate kits . . .

European Champions Liverpool Football Club are set to sign a new kit supplier agreement with Nike that is reported to be worth £75 million (€84.8 $93.2).

This would match Manchester United’s 10-year deal with adidas and place the Reds among the top 5 clubs in the category of kit supplier deals. FC Barcelona currently has the largest kit supplier agreement at €113.5m with Nike.

This after the London Commercial Court dismissed New Balance’s complaint for breach of contract in a dispute that centred over “matching rights” contained in the kit supplier agreement between New Balance and Liverpool which expires at the end of this season.

Court Sides With Liverpool In Action Brought By New Balance